Less is More or Less is Bore- Which philosophy is more accurate?

Less is More or Less is Bore- Which philosophy is more accurate? 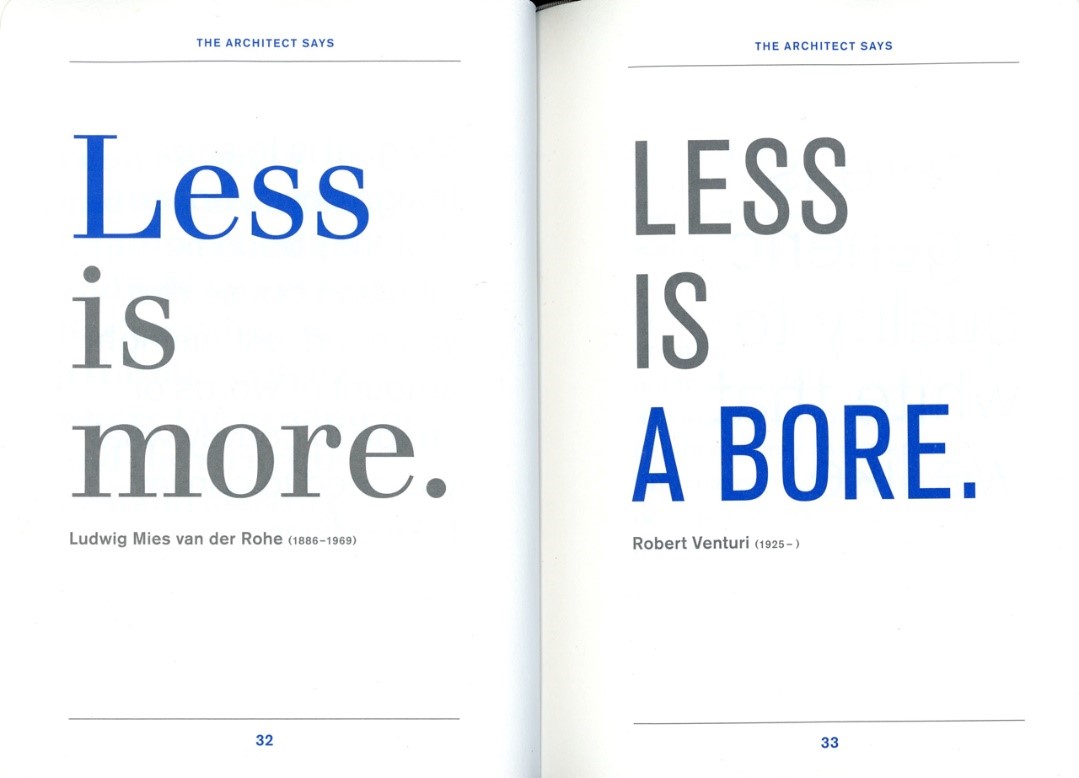 The topic we have on our hands today is LESS IS MORE OR LESS IS BORE. Firstly, what is Less is bore? Less is bore is a survey of global 200 buildings that exhibit postmodern architecture in its all forms. Less is bore idea was presented by Robert Venturi who is one of the main reasons where architecture stands today in modern era.

One of his famous quotes is

“Architects can no longer afford to be intimidated by the puritanically moral language of orthodox Modern architecture,” asserted Venturi.  “I like elements which are hybrid rather than ‘pure,’ compromising rather than ‘clear,’ distorted rather than ‘straightforward.’ … I am for messy vitality over obvious unity. I include the non sequitur and proclaim duality.”

Less is bore has dominated architecture since 1940. For Venturi it was doing something unorthodox like A pitched roof was to be created in place of a flat roof; solid walls were chosen over glass walls; a purely ornamental appliqué arch was made the centrepiece of the front façade, referencing Mannerist rather than Modernist sentiments, which did not happen before like Complexity and contradiction are his saying which led architects to build glass buildings with that cold classy look.

Another thing to his name was that he came up with the motion that modern day architect should depict changing times as well as modern day social requirements.

Human Nature towards Less is Bore

It’s the human urge to look for change as soon as he gets bored from the previous thing. The best example for this is our bedroom. How many times do we move things around in a week? We don’t merely change the things we just move them around change the settings so they would look different and it would give us the mental relaxation that now we are living in a different bedroom vibe and the previous one is changed.

If we don’t do it the vibe just dulls for us as well as we start getting irritated, it just starts to get on our nerves and it’s like somethings not right. There is a saying which says that the surroundings of a human affect him more than the people around him.

Now let’s come onto the other thing on our hands LESS IS MORE as we have talked earlier about less is bore now what is Less is more?  Less is more came to define the brave idols of modernist architecture. Who originally said less is more?

Although originally it came up in in Robert Browning’s poem Andrea del Sarto, ‘less is more’ is more often associated with the modernist architect Ludwig Mies Van der Rohe, who is very famous for his clean-lined glass and steel tower blocks in Chicago and New York City.

It’s another one of the trends being followed by many companies’ worldwide in this era. This ten letters motive/slogan is the one which you see greatly everywhere like sign boards bill boards as well as advertisements. It has become quite a big thing for companies all around the world the slogan but in the recent past the architecture companies are following this slogan with great energy.

How “Less is More” Can Help Nature?

The trend is running at a very high pace in other industries as well as at a similar pace in the architecture industry. This concept is in high demand in the market and has appealed quite a lot of people because as we all know that due to a very high increase in population day by day the space on earth is decreasing at a very high rate. The rate of high population has led to greater urbanisation and the effects of greater urbanisation are high rates of pollution and as we all know that pollution is one of the main factors for the destruction of the earth.

The idea of utilising those materials which are easily decomposable is getting a great hype these days as easily decomposable material has less or nearly no harm on the environment and after a certain period of time it gets into smaller bits and then finish. The aesthetic feel can be achieved by utilising minimal resources as less clutter in a place always looks good. Whereas when all the things are pushed into one thing it gets messy and sometimes it does not look appealing at all.

Advantages of “Less is More” Concept

Everyone has his or her own point of view on Less is more and less is bore. This is an unending conversation and its answer deeply depends upon the person. If you are a person who would like to change surrounding every now and then, then you are a Less is bore person and if you are a minimal kind-a person then Less is More is your thing!